Zero Mass Water makes solar panel arrays that pull clean drinking water from the air.The $4,500 arrays just launched in the United States.Zero Mass arrays could come in handy in areas where water sources are far away or scarce. Some homeowners have purchased arrays as an alternative to plastic water bottles.Around the world, approximately 2.1 billion people do not have immediate access to clean drinking water. A sustainable water startup called Zero Mass aims to make clean water easily accessible to more people around the world. In 2015, it launched its first product, Source — a solar panel array that harvests and filters water from vapor in the air — in eight countries, including Chile, Jordan, and Peru.Source is now available in the United States, CEO Cody Friesen, a material scientist and MIT alum, told Business Insider.Each panel costs $2,000 (plus a $500 installation fee) and generates an average of two to five liters of water daily, depending on humidity and sunlight. Source can work anywhere, and many arrays are deployed in deserts where water is scarce, Friesen said.Comprised of proprietary materials, the panels use sunlight to produce heat, which allows them to collect water vapor from the air. Friesen wouldn’t disclose what the materials are, but said they have an ideal binding energy for humidity.

Source: Zero Mass’ solar panels that pull water from air launch in the US – Business Insider

Even Smart People Are Still Arguing About Fossil-Free Electricityby 3p Contributor on Friday, Jul 21st, 2017 CLIMATE & ENVIRONMENTSHAREClick to share on Twitter (Opens in new window)25Click to share on Facebook (Opens in new window)2556Click to share on LinkedIn (Opens in new window)56Click to share on Google+ (Opens in new window)Click to email this to a friend (Opens in new window)Click to print (Opens in new window)U.S. cities like Chicago have pledged to continue working toward the Paris Agreement on Climate Change. By Felix Kramer and Rosana FrancescatoAt a pivotal moment for climate strategies, scientists and business leaders have started a public debate about how fast and how fully we can leave oil, coal, and gas behind. More people now recognize climate change as the pre-eminent issue of our time, a core focus of resistance, and a source of massive economic opportunities.Imagine looking back and saying, “The Anthropocene Epoch started dangerously, as human activity threatened our future. But that sparked an unprecedented transition that protected our air and water. Every country pulled together to ensure a livable world. Our confidence, ingenuity, and resolve made it humanity’s greatest triumph.”After the U.S. government walked away from its international climate commitments, other key players including companies, cities, and states – where much of the action was already taking place – upped the ante. Policies, legislation, and entrepreneurship increasingly reflect this urgency. Globally, cities and companies are setting timetables to get off fossil fuels. Some are already there! Roadmaps created by Stanford engineer/atmospheric scientist Mark Z. Jacobson and the Solutions Project he co-founded helped make “100 percent renewables by 2050” a meme.But some have privately questioned the goal’s assumptions, research, and feasibility. Now 21 prominent climate scientists have issued a comprehensive public critique in the same Proceedings of the National Academy of Sciences where Jacobson published in 2015. Jacobson’s team gave broad and line-by-line responses, to which the critics responded.This debate highlights the views of experts who support renewables, but believe the electric grid needs a “many of the above” portfolio. To keep the lights on, they say we may long need 20 percent low- or zero-carbon non-renewable baseload capacity. They favor keeping open most atomic plants. They support efforts to develop affordable next-generation nuclear, CCS (carbon capture & sequestration), hot fusion, and LENR (low energy nuclear reactions). They hope these can be deployed at scale in time to make a difference.

Source: Even Smart People Are Still Arguing About Fossil-Free Electricity

There have been so many new approaches to batteries lately that it’s hard to keep track of them all, but most of them have one thing in common: they are all cheaper and safer than lithium-ion batteries.Listen, lithium-ion batteries are the best we’ve got on the market right now. They can store a lot of energy in a small, lightweight package — that’s why they’re in basically everything we own — but they also have some drawbacks. The materials needed to make them aren’t earth-abundant, which makes them more expensive, especially as you scale up in size. They are a fire risk and they also have a fairly short life span.For years, researchers have been looking to more abundant, safer materials to create a better battery. Engineers at South Korea’s Ulsan National Institute of Science and Technology (UNIST) are just the latest. They have developed a seawater battery that runs on water and salt, which they say could soon rival the lithium-ion battery in performance.Sodium is the sixth most abundant element on earth, making this battery far cheaper to manufacture and using seawater specifically greatly reduces any chance of fire. The researchers believe that in the future, seawater could be the key to the large-scale energy storage that’s needed as the world shifts to more renewable energy. The batteries could also be used as emergency back-up energy for homes, businesses and ships.The seawater battery works much like a lithium-ion battery as the structure is the same, swapping out lithium for sodium. The university explains:The battery extracts sodium ions from the seawater when it is charged with electrical energy and stores them within the cathode compartment. Upon electrochemical discharge, sodium is released from the anode and reacts with water and oxygen from the seawater cathode to form sodium hydroxide. This process provide energy to power, for instance, an electric vehicle.The salt water is not just acting as an electrolyte; according to the American Chemical Society newsletter it is actually a “catholyte — an electrolyte and cathode combined. In batteries, the electrolyte is the component that allows an electrical charge to flow between the cathode and anode. A constant flow of seawater into and out of the battery provides the sodium ions and water responsible for producing a charge.”Currently, the seawater batteries have a lower electrical output than lithium-ion batteries, but the researchers are working on building the batteries in various sizes and shapes to increase the charge rate. They will soon start mass producing the seawater batteries in a testing facility and join cells together in battery packs. The goal is to produce a battery pack by the end of next year that is capable of providing the home energy needs of a family of four. 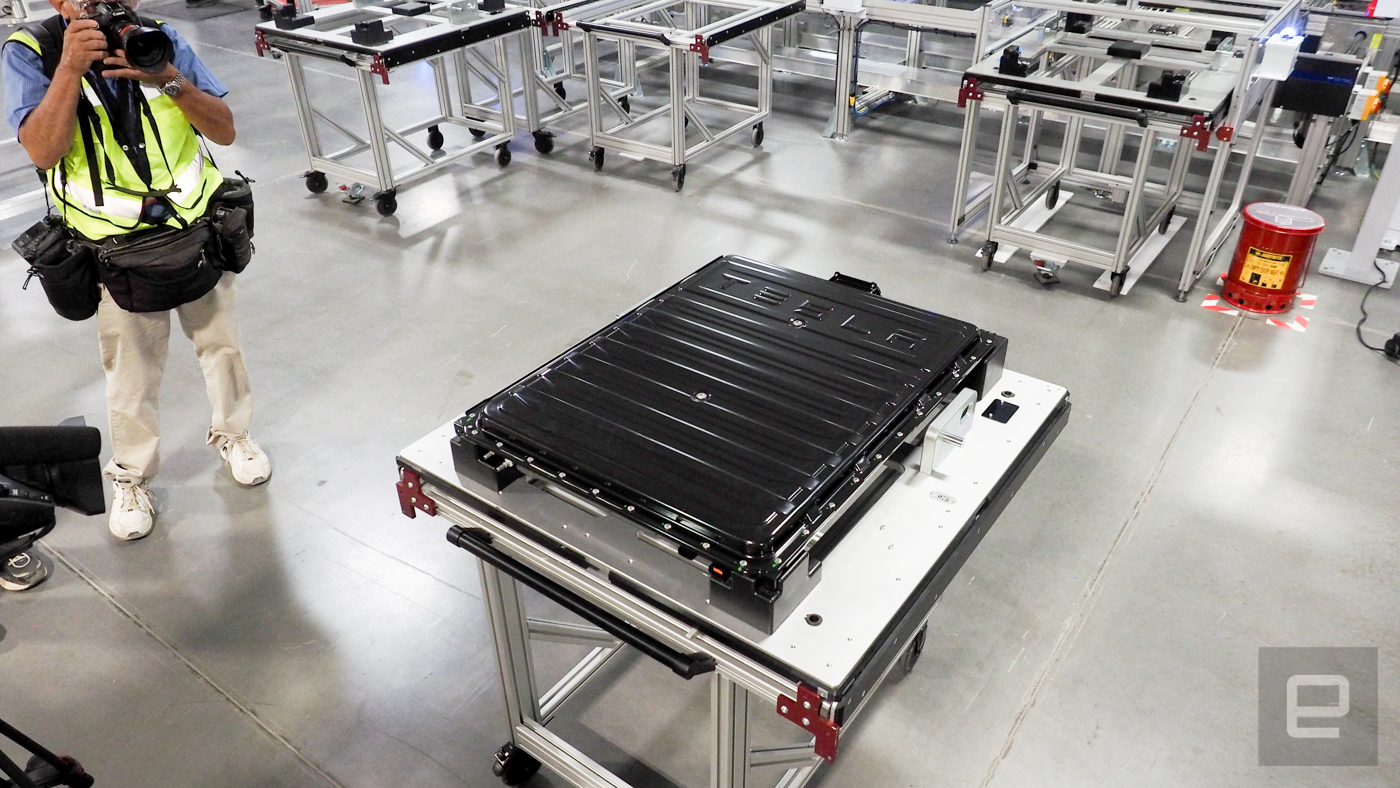 While Tesla’s solar roof / Powerwall event isn’t until tomorrow, the product that preceded both, its commercial… cousin, Powerpack, has been upgraded and is already shipping to companies. The company says Powerpack 2 has double the energy density than the original model, paired with a new inverter (made at its Gigafactory), that’s apparently the lowest-priced, highest efficiency utility-scale inverter available. Arguably just as important, the new inverter also simplifies the installation process, with several once-separate components now baked into it.Tesla’s blog calls the new system a “a cost-competitive alternative to other traditional utility infrastructure solutions”. It adds that nearly 300 MWh of Tesla batteries have been deployed so far –including complexes in California. Now, where’s the solar part?

Source: Tesla doubles the energy density of its commercial batteries

Want to make your barren yard lush again? Just add a bit of soil from your local meadow. A new study reveals that the addition of foreign soil—and more importantly, the organisms it contains—can shape which plants will grow in the future. Such “inoculations” could even help bring back fallow farmlands and turn deserts green.”This is a really cool and remarkable study,” says Harsh Bais, a root biologist at the University of Delaware, Newark, who was not involved in the work. “Dirt matters.”Soil isn’t as simple as it seems. It contains microscopic bacteria and fungi, as well as tiny worms called nematodes and other invertebrates. Ecologists have long known that these underground communities build critical partnerships with the plants growing nearby. But many of these partnerships remain a mystery. Small-scale studies in greenhouses have shown that adding the right soil can promote the growth of a particular plant community, and some researchers have even tried soil transplantation—replacing one soil with another—to get certain endangered plants to grow.Such need is great across the globe, where many once-fertile lands are turning into desert, and a significant amount of agricultural land is lost every year. What’s more, when governments and nonprofit organizations try to bring back grasslands, forests, and other ecosystems destroyed by agriculture and other human uses, they are often disappointed: Restoration can take decades. It sometimes fails altogether.E. R. Jasper Wubs, an ecologist at the Netherlands Institute of Ecology in Wageningen, hoped to find a better way. But instead of doing wholesale transplantation of soil—which can be expensive—he wanted to see what would happen with a booster shot.He and colleagues set up a series of 2- to 5-hectare plots on abandoned, degraded farmland in the Netherlands. They removed about 60 centimeters of top soil from part of each plot and spread a 1-centimeter-thick layer of soil in others. The soil was taken from either a heathland—rolling hills dominated by heather and small shrubs—or a grassland. They then added seeds from 30 plant species from a variety of habitats and waited—for 6 years.When their waiting was up, they compared the seeded areas with and without the added soil layers, looking at which species were thriving and which were not. The source of the added soil greatly influenced what grew where, they report today in Nature Plants. Plots with heathland soil were covered with heather and gorse, whereas plots with grasslands soil were overflowing with a variety of grasses. The added soil made the existing land richer—as the researchers found more nematode worms, more bacteria, and more fungi in those sections of the plots. Those with heathland soil also had a greater diversity of springtails and mites.