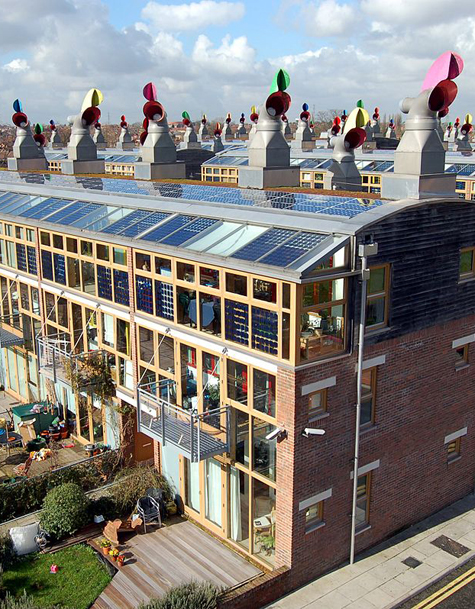 The first generation of net-zero communities, which were designed to add no carbon to the atmosphere, are entering their second decade. Beddington Zero Energy Development (BedZED) in London is about 15 years old now; and the first phase of Dockside Green in Victoria, Canada, is now 10 years old. In a session at the 2017 Greenbuild in Boston, Steven Dulmage with Urban Equation and Justin Downey at RNWL outlined lessons learned from these early sustainable communities and how they informed second-generation developments, such as Zibi in Ottawa, Canada, and Hazelwood Green in Pittsburgh, Pennsylvania.According to Dulmage, BedZED, which has 82 homes, “didn’t hit net-zero carbon projections.” While the project successfully reduced emissions from transportation — as more residents walk, bike, or take mass transit — the biomass plant built onsite didn’t work out. It ran for a few years and then was discontinued. “It wasn’t economic to run, so they converted to gas. The business case for the biomass plant wasn’t well-thought through.”Dockside Green in British Columbia, which has 26 buildings that house 2,500 people, was “built up at the front end during the recession, which was very painful for the developers,” explained Downey. While the developers used a phased approach to development, Downey seemed to say the roll-out of those phases was too aggressive. “They didn’t wait for absorption,” meaning they didn’t build to the pace of tenants buying apartments. Dockside Green / Times ColonistAlso mentioned: One Brighton in the UK, built in 2009, was the first major development built using the One Planet Living framework. While the development reduced carbon emissions by 70 percent in comparison with the average neighborhood development, that’s not 100 percent. Still, homes there sell for a 10 percent premium over comparable real estate because of their inherent sustainability and resale value. There are also other benefits: residents who move there sell their cars as they can walk and bike everywhere. No cars means much less spent on transportation and fewer carbon emissions.

Source: Lessons Learned from the First Generation of Net-Zero Communities – THE DIRT