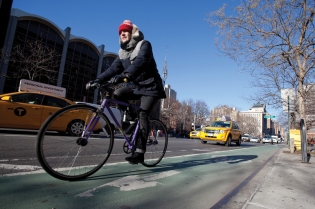 Shirley Gonzales made no secret of her views on transportation when she ran for the San Antonio City Council in 2013. She laid them out in her answer to a questionnaire: “pedestrians first, followed by cycling, public transportation and private automobiles, in that order.” Gonzales promoted this agenda even though she was running in a city where fewer than 2 percent of commuters walk to work.A few months later, after she’d won the election, the tales of some of her constituents drove the issue home. Most prominent was the story of Sharon Ledesma, a 28-year-old single mother who was crossing a four-lane street one night when a car switched lanes and veered toward her and her two children. Ledesma managed to push the children out of the way. Dominic, who was 11 at the time, and Mallory, who was 8, survived but had serious injuries. Both had broken bones and were on crutches for weeks. Ledesma, however, did not make it. She was declared brain dead at the hospital. The next day, after her kids had a chance to say goodbye, her family took her off life support.Gonzales began to hear from other San Antonio families. The city had one of the highest pedestrian death rates in the country. In fact, 373 pedestrians had died in the metropolitan area over the previous decade. And Gonzales’ own district, largely poor and Hispanic, had some of the most dangerous streets, especially Culebra Road, the arterial where Ledesma died. That four-lane road shares many of the characteristics of other deadly stretches for pedestrians: Cars traveling near the speed limit of 40 mph pass between modest homes and retail outlets, while pedestrians walk along sidewalks separated from the traffic by only a low curb for as much as half a mile between crosswalks.