At weddings and formal eve 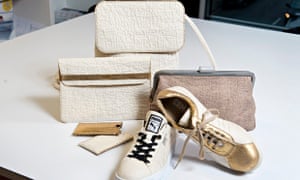 nts in the Philippines, men can often be seen wearing the Barong Tagalog, a thin and transparent embroidered garment worn over a shirt.One of the more surprising materials used in its manufacture are fibres from pineapple leaves – and long strands of the leaves could soon also be used to make a host of other products, from trainers and clothes to bags and car upholstery.Called Piñatex – piña is Spanish for pineapple – the new material was created by Carmen Hijosa, who worked as a consultant in the Philippines leather goods industry in the 1990s. She was unimpressed with the standard of goods produced and started to look for alternatives. It was the strength and the fineness of the pineapple leaf fibres used in the Barong Tagalog that first alerted her that there was another option: “I was looking for an alternative to leather. That was the beginning of my thinking. ‘What is going to be in these beautiful bags that is not leather?’,” the Spanish designer said.The breakthrough came when Hijosa realised that she could make a non-woven mesh – a fabric which is bonded together without knitting or weaving – from the long fibres, in a similar way to felt.The fibres that make up Piñatex are extracted from pineapple leaves on plantations by farmers before they are cut up and layered. They are then put through an industrial process at the end of which emerges the textile. A byproduct of the process is a biomass which can be converted into fertiliser, giving additional income to the farmers.